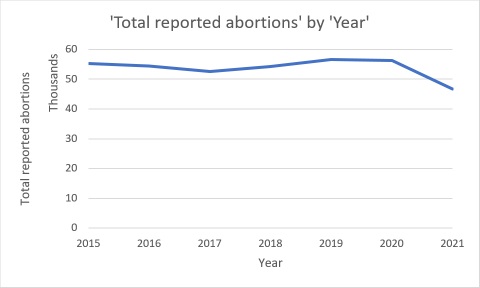 Texas Health and Human Services data show that the number of abortions performed in the state fell following passage of a law that bans the procedure as early as six weeks into pregnancy.

“God definitely shifted the whole situation and just really brought peace to my spirit about it,” she said.

Bernard said the name Amelia kept popping into her head. Once she went to a local Planned Parenthood, she found a quote on the wall from Amelia Earhart concerning inner peace.

If that wasn’t a sign, she didn’t know what was, Bernard said.

“I didn’t have peace anytime I thought about getting an abortion,” she said.

On May 19, 2021, Texas Gov. Greg Abbott signed into law a bill outlawing abortions as early as six weeks. This bill allows for private citizens to file civil lawsuits against abortion providers or others aiding in the process.

As this story went into publication, the U.S. Supreme Court appeared poised to overturn its landmark 1973 ruling in Roe v. Wade, which protected a pregnant person’s right to choose to have an abortion with limited government restriction.

According to data recorded by Texas Health and Human Resources, in 2021 the state recorded a total of 46,639 abortions performed for Texas residents.

Concerning Abbott’s ban, Bernard said she thinks it is a great thing. She said she is pro-life. Although she understands that stuff happens, she said she believes once there’s a heartbeat, there’s life.

“I just hear a lot of women who have gotten an abortion that they regret it to this day,” Bernard said. “Because it’s something that kind of always lives with them.”

She said she’s glad that the ban cuts off at six weeks because she thought it was insane that people got abortions up to 20 weeks.

When she was 26, Arlington resident Desiree Jackson was told she was five-weeks pregnant and thought she was in the clear to take a pill as a form of termination.

Jackson said clinicians told her “the latest that they’ll allow me to do that was 10 weeks.”

After receiving an ultrasound, Jackson found out that she was already 10 weeks along. She then considered the surgical methods of an abortion because the pill was no longer an option.

Jackson went to two different consultations regarding her surgery. In both, she found possible difficulties in performing the operation and decided this was a sign to keep her child.

Given her own experience, Jackson said she believes that a six-week ban is a little early. There are few symptoms when it comes to pregnancy unless someone is constantly taking tests, she said.

“There are some women, my aunt, for instance, she didn’t know she was pregnant until she was 15 weeks,” she said. “She had no symptoms at all, she had her period as regular. Her normal day was normal but did not know she had a growing life inside her.”

While Jackson didn’t receive an abortion, she said it is a women’s choice in the matter.

“I am not a fan of abortion, but I know in the world we live in today, women are not safe,” she said.

Jackson did not live in Texas when the bill was signed into law but moved back after her daughter was a month old in September 2021.

While the intent of Texas lawmakers was to eliminate abortion, many Texas women who could afford to do so traveled out of state to have the procedure.

The Texas Tribune reported that, in the first four months of the bill’s passing, Planned Parenthood clinics in other states recorded an 800% increase in patients from Texas seeking abortions.